One of the biggest gambling growth markets at the moment is without a doubt – Political Betting with vast sums of money now being traded on all major political events.

In the UK, the recent ‘Brexit’ Referendum had over £100 million traded on Betfair alone(the highest volume traded on any Betfair market) so it’s fair to say Political Betting is here to stay and has captured the imagination of the betting public.

To help understand more about Political Betting, I recently spoke with Paul Krishnamurty – a freelance journalist and professional gambler who specialises in these markets. Paul provides political tips for Betting.Betfair and also via his own Political Gambler website so is well qualified to talk on the topic.

As part of this interview, I wanted to understand what is behind the surge of interest in these markets, how a newcomer can get involved and of course – the performance of Paul’s tips (plus his advice for the US and Labour Leader elections!).

SBC: Political Betting has certainly grown in the past few years with huge sums of money now being traded on all major markets. What do you feel is behind its newly found appeal?

Paul: Political betting is relatively new. I encounter people all the time that knew nothing of it – including politicos (political aficionados). I think it attracts a different type of punter, one whom may bet on nothing else.

For me, the attraction is nuance. Unlike say football where millions have access to and can understand the basic information, politics is geared towards the expert.

I know future leadership candidate’s years before many have heard of them. And, my results keep me keen as I’ve never lost overall on a leadership election and have had 25/1+ wins on Iain Duncan Smith, Michael Howard and Jeremy Corbyn, as well as 16/1 about David Cameron.

It seems to me that real-world betting is less luck-driven than sport – the same doubtless applies to other novelties like Sports Personality Of The Year and X Factor.

SBC: Where there is lots of information available such as in the US or UK Elections, we would expect an efficient market with very accurate prices available. What do you look for when weighing up a political betting market?

Paul: The more nuanced the market, the less likely we’ll see accurate odds but this can also be the case from time to time in the bigger markets.

For example, Jeb Bush was priced at 5/4 for GOP Nomination at the start, yet is now 9/1. With multiple other favourites in the betting being overhauled so far, often the early market favourites are too short, compared to their chances.

If we look at the historical markets for the next Tory leader, in the UK, every single opening favourite in the past 50 years last lost.

Personally, I couldn’t understand how Liz Kendall was the 11/4 favourite when the next Labour leader market opened in 2015. It seemed as though she was so short in the betting, because the UK newspapers (influenced by the Tory party) had hyped her so much. Anyone who know Labour supporters, know they are the direct opposite of Tory supporting newspapers, and Liz ended up with just 4% of the vote.

SBC: It’s been a huge year for political betting with Brexit, Labour & Conservative leader markets and of course – the ongoing US Presidential election. How have your political betting tips fared this year and what have been the highlights?

Paul: It’s been the busiest year ever, pretty much non-stop on either or both sides of the Atlantic. In particular, I published an extensive portfolio via www.politicalgambler.com for the Republican Nominee, EU referendum and Conservative Party Leader markets.

Brexit was the highlight, both in terms of success and relatively short work. By backing a combination of a narrow Remain win (50-55%) and Leave, that portfolio earned 170 units profit.

I also made 87 units on the Republican nominee but it felt like losing as Trump was the worst result by miles. I made money from laying Jeb Bush when he was a 35% favourite, backing Ted Cruz when a 3% outsider and Paul Ryan at 0.5%, partly cashing the last two out for a nice profit. However I didn’t think Trump would win and timed my cover badly.

Likewise on the Tory leadership, a mixed bag of results over a long period yielded an overall profit of 80 units. My early bets were perfect, backing Theresa May twice at 8% and 10%, Boris Johnson at 20%, and earning a profit from backing George Osborne at 11%, then laying at 33%.

However when the race started, I was blindsided by Boris Johnson’s withdrawal, 24 hours after I’d placed 80 units on him. I clawed 45 of them back by getting on May again at odds-on. 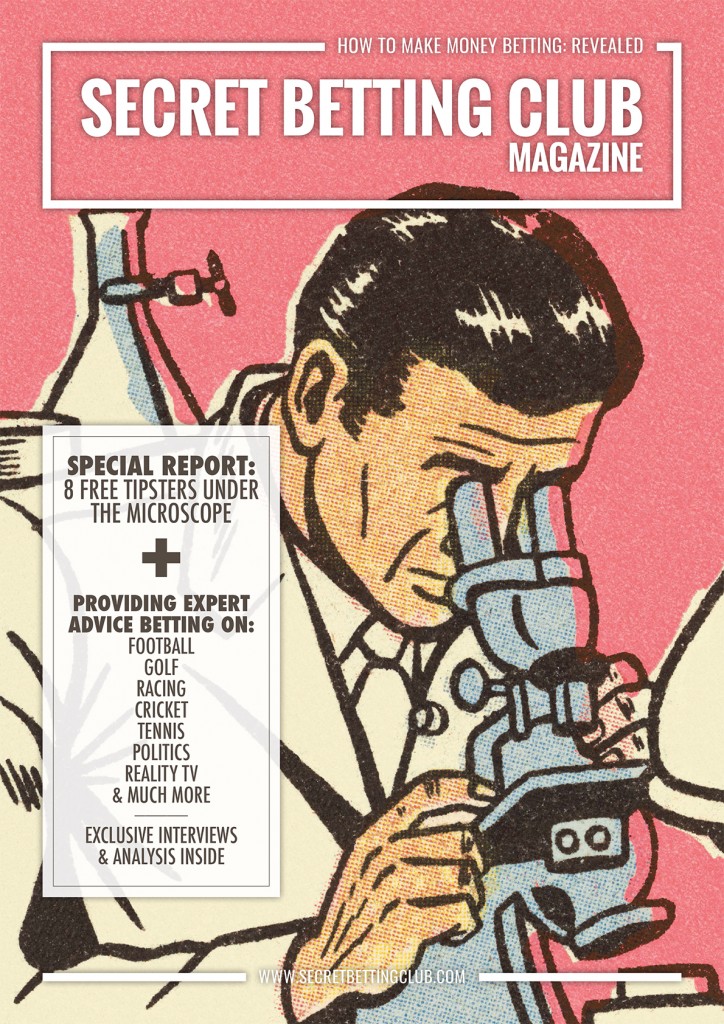 8 FREE TIPSTERS UNDER THE

SBC: Looking back historically – how have your tips fared in years gone by? Do you have any numbers you can share for example in the last US Election, the 2015 UK General Election or the Brexit referendum?

Paul: Prior to the above 3 big markets…

2015 UK General Election: 30 units profit from a massively outlay across dozens of markets. A bad result. I predicted the Tories would beat Labour roughly 280-270, instead it was 330-232. Big losses on the overall majority market, but covered by wins on UKIP seats and several constituency bets.

2012 US Election: 300 units profit. Backed Obama at 52% two years earlier, never laid back. Also made a good profit from backing him to win over 300 electoral college votes. Small loss laying Mitt Romney to be Republican nominee.

SBC: There is huge interest in the US Election with £29 million matched on Betfair already in the next President market. What advice would you give to those keen to get involved in trading this market?

Paul: The odds are shrinking fast on Clinton, but don’t oppose her. If you don’t like backing 80% chances, check out the side markets, such as state voting, percentages of vote share and the distribution of electoral college votes.

SBC: You are on record as stating you don’t believe Trump will win – Can you outline why and what positions you currently have (and might also recommend!).

Paul: I’ve been against Trump from the start and have laid him several times from 18% to 31% in the Next President market. He is a unique, historically poor candidate who only won the nomination due to a bizarre set of circumstances in the GOP race and monopolising the media coverage. He consistently records over 60% unfavourable ratings and has turned the race into a referendum on his suitability. His ceiling is well below the required 50%. The closer swing voters consider him, the more they’ll turn away.

Obviously, the odds on Clinton are prohibitive, but there could still be some value in other markets. I think she’ll win at least 330 electoral college votes, taking all or nearly all the toss-up states won by Obama (who got 332). Plus due to Trump’s unelectability, several Republican states are coming into play – Arizona, Georgia, Utah, for example. I haven’t bet yet but am tempted to lay Trump if short odds-on in some of these. He has no ground game to speak of, and could be overwhelmed if current trends are maintained.

SBC: How about the other active Political market – the Labour leadership contest. What is your take on this given the current markets and what positions do you hold?

Paul: I have 30 units on Jeremy Corbyn at 1.9, and no plans to lay back at present. I think he could have been vulnerable to a heavyweight opponent but Owen Smith is a bizarre choice, and no more electable than Corbyn (the fundamental reason stated for challenging him).

If Corbyn wins to stay in post, the ‘next’ Labour leader market stays live. Here I have existing bets on Lisa Nandy, Clive Lewis, Tom Watson and Stephen Kinnock. I’m particularly interested in the first two.

SBC: Finally, what resources (e.g. newspapers, pollsters, blogs, social media) would you recommend to help inform those keen to bet on politics?

Paul: A wide-range, including on the extremes of the argument even if you disagree with them. The narratives pumped out on Fox News or MSNBC will influence Right and Left voters respectively.

Once you have this good bank of grassroots opinion, add all the less partisan sites. Washington Post and Politico are superb resources. The Hill is a great up-to-the-minute Twitter follow if you don’t mind a lot of click-bait. For polling, Realclearpolitics is peerless.

CNN is a good centre-ground TV alternative to Fox/MSNBC, and does an outstanding election night show.

My thanks go to Paul for taking the time out to answer these questions. If interested in reading more from him, be sure to check out his Free Betfair columns and Political Gambler website. You can also find him on Twitter via @paulmotty

Paul is also featured in our recent special report on free tipsters, where we interviewed and analysed the results from 8 betting experts with proven track records across a variety of markets and sports. Its safe to say there are some very good free tipsters out there if you know where to look!

You can pick up your copy of this free tipsters report, the instant you join our service at the Smart Betting Club with full access to our exclusive members-only area.

Not only this but as an SBC member you can also gain full access to our monthly Betting Magazines, Practical Punter Reports & enjoy the peace of mind of our 90 Day Money Back Guarantee if not satisfied once joining!

“I like that the SBC is independent. I know that when they recommend a tipster, or upgrade or downgrade an existing rating, that their opinion is based on results and judgement, not on hidden commission ”

To access our great pages including tips, strategies and interviews, simply login or register below.

You are now a member of the >LEVEL< Tier
of the Secret Betting Club.